What is your role as an Architect? (How i spent my week in the CME)

If youre on my Facebook page or Google+ or Twitter, youve seen these images already.  However, this week and last i got to engage one of our Project Teams, and help them kick off their Revit Model.  During that time, through Twitter and Social Media, i read two things, and reacted:
1.  All architects should be Programmers.  (Tweeted, and i disagreed when i read it)
2.  Using Revit is frustrating every day. (Facebooked, and i got annoyed) 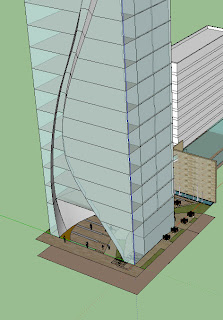 Then, happenstance had it that i was asked to write a paragraph on how Emerging Technologies change our jobs... And i laughed.  It isnt the most original comparison out there, but i liken us to the Record Industry:  Are Architecture and Engineering Firms still making Casettes and wanting to sell them for 14 dollars?  Certainly a CD or an online album is a better product, so... Isnt it a little justifiable that the road towards a better product is a harder road?

The interaction was interesting.  The design started in other wares, due to familiarity for the team involved.  At this, im not as displeased or as intolerant as my Revit Persona on forums.  Why?  They used it (in my subtle humble opinion) just the right amount:  They didnt toil hours on mullions and entourage, didnt get overly complex.  They told a story, and asked about moving to Revit.  Props to them, i love this crew.
A few things about working with Revit Massing and the Form Editor:  Reading this post, youll discover i had to do 3 "major" rebuilds, with destructive editing that made us lose Face Association.  Two interesting things about that:
1.  I cant even be upset about it.  Even deleting the entire skin of the building, and reskinning the entire mass, took less than an hour each time i did it. (Were in early design, so Curtain Grids hadnt been customized)
2.  Most of the *redo's* were because *I* didnt understand what was driving the Design Intent, and *I* wanted it to be constructed more parametrically to suit those needs.  So on with it. 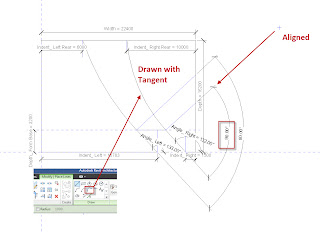 Kelly Cone and his infamous SaRang Mass, reminded me that Nested Families with Lines in them could come in handy for this sort of thing.  So i made one.  (Time investment: 15 minutes).

Important to note: The Curves werent there in the first version, since they werent in the project yet.  But Constraining a Parametric Tangent Line was a massive help (Thanks Zack Kron for the lesson!):

If you have a flexible Reference Line (parametric length or angle, or both), constrain a Reference line Normal to its end (90 degrees).  Any tangent arc will have its centerpoint on that second reference line, so the constraint is a simple "Align and Lock." So Indent Front and Angle affect the arcs beginning, Indent Rear affects the arcs end, and (invariable) the arcs radius, which has its centerpoint locked down.
This brings me to the two points above:  Architects as programmers, and Revit being difficult.  All the promises out there about BIM... "Integration, streamlined documents, coordinated drawings..."  I mean, doesnt it make SENSE that Designers learn this?  I got the masses design intent wrong the first few times, because i was deconstructing a design model and didnt ask what was "driving."  But by definition:  Someone knew what was driving, they drove it.  And if making seamless and beautiful forms comes from parametric centerpoint constraints... Then wow. This was when i realized i was WRONG for disagreeing about Architects and Programming.  I mean, this isnt writing code.  But, how DOES a "Coordinated Model" get built from a "design intent" unless the "designers" are doing the "modeling?"  (BTW, midway through this model the designer is now playing with Divided Surfaces and Intersects and Patterns.... I love this crew!)

So onward. These are pretty simple things, but they make alterations a snap.  (These are the early versions, before the tangent arcs were there).
Well, i wont bore you with writing and writing and writing (its just making a Mass, for crying out loud), but what i love about the process is being able to watch the subtle changes, as the design team makes it real.  Too often, its beautiful when designed, made real in some other program, and the two never meet, and are never the same.  So, the progression.
From the first Revit iteration, to the current. It certainly doesnt LOOK like it changed much, but there were a bunch of iterations in between where it had lost its grace as parameters changed.  This is why i love the process! 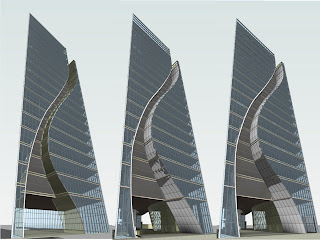 The angles are constantly differing, floor to floor.  And they were all changing (as were the locations of the Relief) as the program was fit in to the building.
The walls of the first floor "Tunnel" were constrained as well, as they were complex curves that began based on the facade elevation, then proceeded to vertical.  Again, that question of "Who should be doing the constraining?" 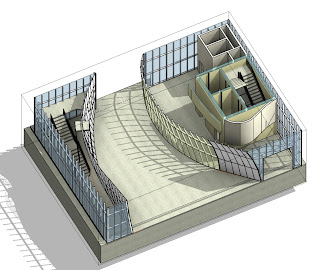 The more iterations we played with, the more the walls shifted.  It became evident that there was going to be some pretty extreme shapes, for these panels.  And that they werent all going to work out flat. 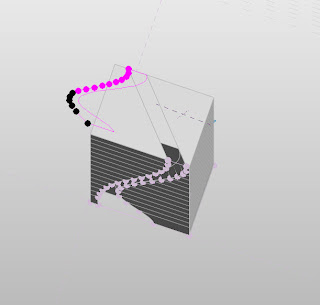 Aside from that, i had a pretty good idea that the Mullions werent all going to end up so ordinary as well, i had just UZI'd Curtain System on it as a placeholder.  So we went back to CME and started playing with Divided Surface.  There's a GOOD reason why:  The v1 Mass i made, the "relief" on the facade was a consistant angle, all the way through. Why?  I made it that way.  The SU/FZ Model showed angles, but the interpolated "lines" i was seeing in plan were skewed and arc'd.  So i ASSumed (big mistake) that the team meant for it to be consistant.  As that wasnt the intent, you can see why i then rethought the Order of Operations i had gone through.  Making the shape this way didnt make as much sense.

But then i got to thinking:  Wow, its going to helix, then.  Between every different angle on the Floor Plates.  Then i got to thinking about the expense of such helixed objects, and whether or not you could NOTICE while looking at the building?  (I was told in Studio:  Do it severe enough to look like its not a mistake...) 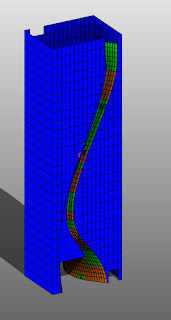 With that, after the latest version was massaged to the correct shape, i went back to the Mass to Divide the Surfaces and Apply Patterns to them.  For now, i kept it rectangular and normal.  The designers are taking their pass at it after Tuesday.  Still, a nice Curtain Panel made by Zach Kron that uses Reporting parameters to evaluate the sizes, angles, and deflections of the panels was put on.  There are a few versions of this family floating around, but this one uses parameter values instead of different nested families for visibility.  But wow, it tells the story quickly. Load it in to a Project and include a few different views using Filters to color the panels based on a variety of the reporting parameters, and you can color by length, clolor by area, color by deflection, etc.
And this is where the analogy of the Casettes and the CD's comes in for me.  And honestly, this is what this post is about:  Its not about Form Editing, or Revit, or Massing, or Modeling. 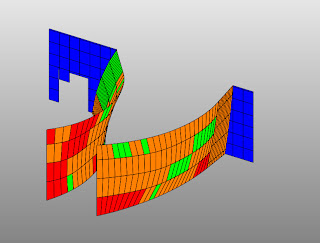 Someone came up to me when they saw this on the screen, and wondered why i was looking at the deflection at all?  Why bother?  To be fair, i was doing it of my own volition... Not at the behest of the project team. 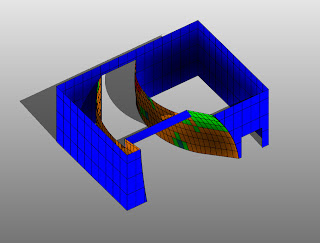 But i was asked "Why would you care?  Why not let the Fabricators deal with it?" i actually have to admit- i got a little snippy (shocker!).  I mean, this IS our "better process."  Right?  How many times in our careers do we watch something get Value Engineered because its expensive?  I can tell you how to make this entire project cheaper, right this second:  Straighten everything out.  Then again, i hear we can save some money, you know, if we just leave all the glass off, too.

But to be able to say:  We kept the design, but we looked at it for extreme cases that could drive the cost up, tried to minimize them, worked at keeping the design intent while TRYING to keep in mind that someone downstream would have to "make a baby" out of this thing... Isnt this why we are here?  Is this the "New Role" of our jobs?  Not just to make something pretty, but to make something pretty HAPPEN without getting marginalized out of the concept by pragmaticism that we cannot respond to?
Yeah, Revit frustrates me at least once a day too.  But this is (imVho) our jobs now.  I dont want to deliver the same thing i did yesterday.  And i want to know we did the most we could to create the best Built Environment, as efficiently as we could. Its harder, and it should be.