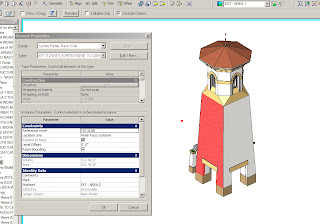 So, until we get the capability to give a Wall a vertical angle in Revit without using a Mass/GM family and a Wall By Face tool, that remains my preferred method for putting walls up in non-vertical orientation.

That said, everyone who's worked with me knows im a notorious hater of Filled Regions, in Wall Sections. Even with the capability to lock/constrain them to the modeled objects, i always take the side of using Edit Cut Profile on the cut patterns of the modeled objects, wherever possible. 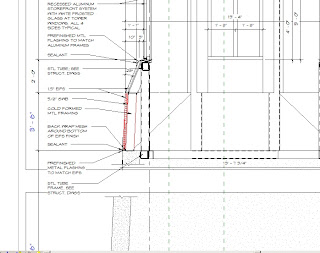 Most of the time this is simply for detailing and cleanup in small areas, but it also comes in to play in areas such as beam wraps, where a Wall may be used (built as a chase) instead of walls and a ceiling below, for simplicities sake. In any event, while working on detailing the above pictured tower, it become evident that Edit Cut Profile cannot be used on Walls that are created with the Wall By Face command.

When you attempt it, you are able to get in to sketch mode, and you can work until you try to finish the sketch. That is when you get the ominous "Fatal Error has occurred" window. 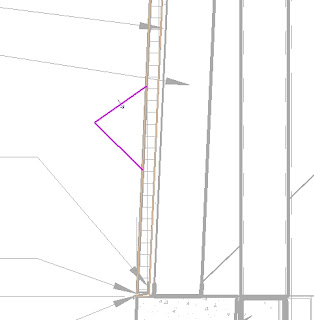 This file and a test file were submitted to Autodesk, who have passed it on to development, as it appears to be a code issue. Hopefully they will have it resolved in the 2009 release.


As the self proclaimed "Model Nazi" you can imagine the amount of anxiety i had, at having to concede to a project team that they could detail this portion of the building using Filled Regions, haha.


These walls presented another interesting issue as well:


When i went to place a door in the wall, the door was only able to be hosted at the very base of the wall (Right at the Level T/O Slab). As i was trying to place an Access Door from the roof, this was not useable. It would not allow us to place the door on the ground and raise it up, eiher. We

received an error that the door failed to cut the wall, and that it was deleted.


The fix for this was interesting: We were able to place WINDOWS inthe walls without incident, so we used Edit Family to make a copyof the door family. We then changed the families catagory to a Window Family, and then we placed it in the tower. AFTER having placed the "window", we were then able to go back to the fmaily, and change its catagory back to a Door Family. This let it stay placed in the desired location in the tapering wall, while still scheduling it as a door.