Some nights im thankful im not faster than i am... Many from Blogger Night have already done a fantastic job posting on the up and coming features, so i wont dare try to accomplish a similar task, as theyve done a much more in depth rendition than i could muster at such an hour. David Lights blog HERE is a great example.
But every year when the Factory is getting ready to release another year of features, I start thinking about what it will mean a few YEARS now, not a few WEEKS from now. Sometimes we get features that may feel like minutia when we get them, but they give away the amount of work "under the hood" the folks in development had to do to get us here, and i wonder about the next few years. (Note: That doesnt mean i think the new features are minutia, im looking forward to this release immensely, particularly because of what i discuss below!).
So, here are a FEW of the features discussed on the up coming release, and what theyve got ME thinking about for the future. 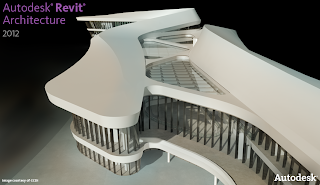 1. The first feature im awfully excited about, isnt one thats new to 2012... But is a recent addition: Revit Server. In short, its a great new system of File Synchronization with a series of LOCAL servers and a CENTRAL server, so that only permissions data needs to travel immediately to the Central, so not everyone across a WAN must feel the pain of Comm Chatter. Its a welcome addition, and we have it deployed across our offices already, loving it. If you want to learn a BUNCH of in depth information on it, check out Robert Manna's blog.

What does this mean for us? At The Beck Group, we have a large amount of people on site (job site, not work site), and sometimes those job sites dont JUST mean construction: The entire Integrated Enterprise concept is co-location and submersion in our counterparts environments, and we often ha 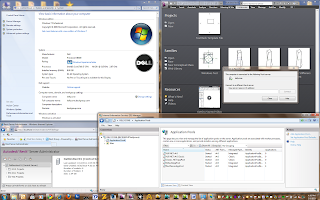 ve Architects and Reviteers right out on the site. Kelly Cone, from our office, decided to see how far we could push this concept: There might not be a server on every job site, but there is almost certainly a laptop.

At left, after many headaches, and with much support (from those who remain nameless so as not to bury their inboxes): Revit Server running on Windows 7, on the End Users laptop. Fully functional. (Image credit to the Cone Head... Any questions about this name, email me. I have pictures...)

It may be minor, but what are the endless possibilities? Suddenly anywhere i have Wifi/VPN, i have a way to- not only work- but work QUICKLY. This is COMPLETELY unsupported, but the point is... It could get there, quickly. And it starts with this years release of Revit Server. Its an exciting time to be in this field. Kudos, Factory.

2. File Segregation, and File Desegregation. I got in to Revit in 8.1, and remember the release of 2009 vividly. We were stuck in 32bit windows, with a 485,000 SF project. The advent of By Linked View for elevations and sections meant immediate buy-in, since we had 8 Arch and 8 Structural models tied together. It was so paramount we pushed the project in to 2009 in early Beta.

The Factory has given us a TON of new tools in the last two releases, to get away from the By Linked View workflow. Tagging Linked objects, reconciling orphaned tags of tagged-linked elements, Filters applying to Linked Files, etc. Personally, im not sure getting AWAY from Linked View is the way to go, but i understand the appeal: Linked View is clunky. It means two models, two views to cut, two things to coordinate. It also means (currently in 2011) two sessions of Revit opened, since you cannot open linked files at the same time. Happy to say- In 2012 that has been fixed, and you can open locals of two linked-together centrals once again, as we could in 2010.

But, is tagging Links better workflow than Linked View? Assume dimensions and tags are now in Parent, and Child is the linked walls. I dimension in Parent, realize the dimension isnt the value i want, and i go to Child to change it. Now the dimension isnt there. I redim, change it, SWC, switch back, have to move annotations, etc. Id just assume dimension the object in the file the object is in, but i also know im one of the FEW that enjoy using Linked Views. My hope, however, is that all these new features that are bridging the gap in the Links (we can now KEYNOTE Links, as long as we show the COMMENT (not the boxed note... since keynote legends still dont work), and as long as both files use the same Keynote text file), eventually the concept of Link will diminish, and we will have some new hierarchy. (Speaking of which, go LOOK at the files on Revit Server, and tell me the lines dont BLUR about what a file is!). 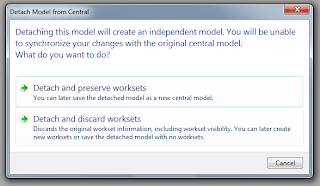 THEN there are Worksets. Wait, are there? Only if you still want them, survey says! You can now DFC and completely strip a project of Worksharing all together. (Users, read up: You have two options- Detach and keep worksharing AND worksets, or Detach and blow Worksharing and Worksets away). You cannot strip WorkSHARING but keep WorkSETS. And i- for one- raise a glass to this.

Ive never been a proponent of Worksets for Visibility (if you have any clue who i am you already know this), in fact since Element Borrowing has been around, once we got to 64 bit stations i through worksets in with Linked View, vis-a-vis "Things we have and still sort of need, but an entire retrofit of file division management could do away with this..." So i wait for the day that Worksets disappear alltogether. But for now, its a great way to clean up a disasterous file, archive for packing, archive for the road, for the job site, for a consolidated work staff... Take your pick.

Standalone file --> Revit server file (while the staff is on the road on their LAPTOPS running Windows7 --> DFC Back to unworkshared (when staff returns back to base.) I love it.

3. Track Model Changes. Oh, im sorry. It wasnt called that. What is it called in 2012? Worksharing Visualization. To be clear, it is NOT a tool meant for tracking ANYTHING over time, other than who owns what, what youve e 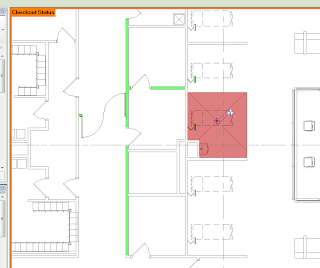 The Worksets by Color is a cute feature, for those of you really struggling with leaving ACA, or really having difficulty managing Players and Worksets. But the real magic... Is the "Ownership Status" and "Checkout Status." So let me get this right:

It compares the objects in the model (Drawings) against a set status of Element Borrowing (Fixed point in time being my last SWC). So what else compares Drawings to a fixed point in Time?? Revisions?? Drawing Issues? Construction Administration anyone? Hey, maybe it doesnt draw clouds yet, but it color codes what items are out of date in a file? I cant help but wonder: If i change my username to "100%CD" when i plot my drawings, and then i keep that out of date local sitting on my computer in C:\Temp, after two weeks of changes, i wonder how colorful everything will be if i open it?? It wont be clouded, to be sure. And it might even tell it its not reconciliable. But maybe, just maybe, were finally getting close to real "BIM" Document Management.

All of my far fetched dreams, only exist because of the fine folks in Development and Support, who brought us all of these features this year, and MANY more. (Seriously, many more. Ambient Occlusion and Hidden Line (lust), new Rebar (love), revamped Core Modeling, (worship), and adaptive components in the Project environment (respect), are so mind blowing, i wouldnt know where to begin. Good thing i kept this one brief.

Next on deck: Those Adaptive Components, and real Field Layout from real BIM models.