A few more images from Revit and the site...

As i mentioned previously, rendering wasn't in the scope of the work for the project, so (while we called out materials in the CD set) we had not produced any accurender materials inside the Revit model, nor had we gone to any other app for imagery.
Well, i had some downtime this week, and i wanted to take a shot from the hip to see how they would come out. Ive read all the arguments about accurender... Its slower, it looks cartoonish, etc... And i don't disagree with any of that. But, there's no denying (in my opinion) that there is a perfect elegance in NOT having to leave the program, to get the rendering.
On a process level, i look at it like this: Often times i'll work right in the Revit model while i client is standing behind me. Or, we will be in a conference room with a laptop and a projector. Seeing is believing, you know? Sometimes its great to change on the fly, add in a family here and there, and hit the lo-res-go-button so they can get a feel for it before too much time is invested. I know leaps and bounds have been made with the DWG compatibility, but sitting in the conference room and saying "Hang out for ten minutes while i STC, then export to 3D DWG, open up Max, reload the link, THEN set up a camera, and get around to your rendering. Oh, you wanted the window WHERE??? hang on a second, let me go back..."
The other woe i have with these images... The hardscape. I managed a little down the promenade, in the form of RPC trees, and an RVT light fixture that i had modeled for the job anyway. But renderings really show off what consultants modeled on the team, and which ones don't. Right in front of these buildings is a very nicely done canal, with some ornate site work. If we had it modeled, we could show it off... But alas...
I will say, i have great faith in the Development team that a better renderer is on its way. And if it isn't... I'm plenty fine with Accurender for now. The following are all quickies... I spent a coupld of hours on the whole model attaching materials, a few minutes throwing sun angles at it, and let them render for about 10 minutes

each (the larger ones). 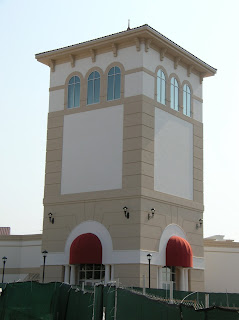 Here is a shot from the other side of the canal, which isn't shown. Below is a picture of the actual tower, as it stands. The colors are still slightly off, but i didn't spend too long tweaking them... All in all i like this one. I think i may have a colleague try to photograph the site from this spot, so i can PS the canal in place...

Here is an overhead shot of one of the restaurants. This begins my RPC rant: We have a TON of RPC content, but evidently its not compatibly with Revit. I dumped it all in the standard RPC content folder, and went to make a new RPC family, but only the standard 6 or 8 show up. Then i was heartbroken to find out what RPC peeps cost, LOL! I know, i could PS the people in... But you have no idea what a pet peeve it is of mine to go out and come back in... See above, lol. I know, those paver's are terrible. They were a quickie ground plane. If i get time this week, i may actually model some of the 'scape in. 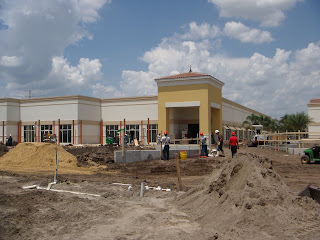 To continue my ramble... These images (not these specifically, but images of 3D models in general) are very important to me on a personal level. When we all got in to architecture, we spent years in school "learning" about the things that thrust us in to the realm of architect/designer:
*Wanting to see things in section
*Wanting to profess how much sleep we didnt get
*Coffee
*Starting over an hour before the deadline after *12 hours straight of work
*Wanting to mesh sections/Plans/Elevations in to one single drawing with abstract construction lines everywere
*Wanting to sketch on garbage
*Demanding sharp pencils (and ill have you know, they laugh at me at the gym... When i go to pick up a pencil to mark my reps, i pick up the entire bin of pencils at once and turn them upside down... They make fun of me now...)
Does anyone see where i'm going with this? lol... I think its so programmed in to us, to understand that wall section means this space has good lighting, or this space has a tight ceiling. And yet, we show plans, and we show elevations, and we show sections... And who EVER sees an architectural creation in plan or elevation? To an extent, i believe there is a language breakdown between the graphical language we've all been taught to speak in, and the language of the space were creating, which is what our clients are after. My favorite times with Revit, have been showing Revit models to a friend of mine who self-proclaims "I have no idea what I'm looking at when i see a plan... at all." Because when i show this person the models, i do it solely with camera views. In a language they can understand... Eyesight. I know 3D models are nothing knew- as face based visualization models have been around for quite some time- but now that they ARE the Construction Documents, they are no longer as easily sacrificed on the lamb of budgeting.
After all... I walk around my apartment with my eyes. I don't have a plan of it with me... Not all the time, anyway. :) Your thoughts on the subject are always welcome. :)
Posted by Aaron Maller at 9:23 PM No comments: