A few months have gone since the last post, and certainly (if for no other reason than to further the AU Unconference conversation) i meant to post a bunch of content for Revit and discussion. But i digress- its been an eventful few months since then! The AUGI posts disappeared, then came back, ive been on the road a lot for work, and weve been making more changes. So here we are!

A few interesting Content Updates: A year later, we are still strong (even stronger) believers in the Kiwicodes Family Browser, at Beck. I started out with v1, the office got deployment at the onset of v2, and i am just now updated everything for v3, which is available now. (A post on it can also be found at http://www.revitforum.org/, where many of us went for our Revit conversations after the debacle at AUGI. )

V3 of the FB has a lot of improvements, but this post is more about what we discovered during the implementation. Some of it has to do with the FB, some with Revit, and some a combination. 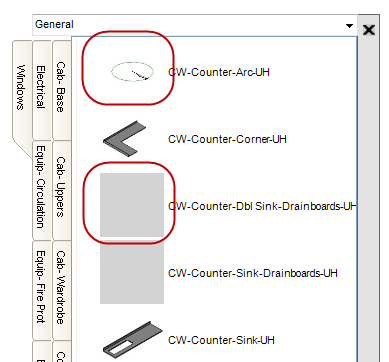 The first issue we came across, was Previews. This reared its head in v2: Some families were getting Gray squares for previews, while others had such a small preview they were basically useless. The latter is a typical Revit problem with all things Radially Constrained, since the Family extents reach out to the centermarks.


The former, it turns out, is an interesting problem. When the ORIGINAL "Save As" is done, that CREATES the file, if it is in {3D}, it will not get a preview in the FB. Im not sure why. Solution? Switch to "View 1" (if there isnt one, make one) then do a SAVE AS over the family (not a regular updating Save, it wont fix it).


These, coupled with the radial issues, got me thinking about making the previews myself. Tedious, to be sure... But im thinking there may be some return on investment there.

We have been playing around with the size of the previews on different tabs. The video doesnt do it justice, but we have some tabs maintaining the 64x64 standard images that the FB generates, and some up to 100x100. It makes the FB look strange and require scrolling, but for content where the image tells the differences, it works out great. But then we noticed another issue, and ive heard on http://www.revitforum.org/ that other firms have had this issue as well:

Although our content is named sequentially, sometimes when it gets to the family browser... It isnt. They appear in haphazard order that SEEMS to have no rhyme or reason. After a bunch of testing, here is what we found out:

It IS however, looking for the ORDER THEY ARE PLACED IN TO THE DIRECTORY that is listed in the FB text file.

In my example above, you will see that the Families are all named sequentially. I ran the UpgradeRFA on them to ensure that the families were all "created" in sequential order. I used a Batch processor on the images to make sure they were as well, and manually did the same for the text files. Here is where it gets cool:

I built them all on a folder on my desktop. Then i "moved" them to the office library. If i have sorted by Date Last Modified, they populate the Family Browser in REVERSE order. If i sort Windows Explorer by NAME and then drag them to the library, they populate the family browser palette in Sequential order (as you see in the image).

True to form, that is how they show up in the Palette if i instantiate it after doing that.

So if you want to insert a family in alphabetical order, and it keeps putting it at the BOTTOM of the palette, Cut and paste everything AFTER it, to another directory. Place your new family. "Move" the stuff back.

A video, if you would rather follow along on the screen. I dont populate the FB in the video, since im tied to the network, but youll get the idea. :) EDIT: I also apologize for the lousy vid quality! But its late, and im not redoing it. Youll get the pint!

I still owe the unconference group a bunch of content posts, among some other interesting things weve been working on. But its been a hectic few weeks. More of my posting has been over at RFO these days, so head over there.