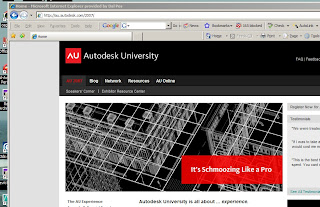 I was on the home page for AU07, and i saw this flash animation that said "Schmoozing like a pro," and it made me think: Man, we should all start getting the word out about going to arrange some get together's!
I registered towards the end of last week, along with two of my colleagues from Dal Pos Architects.
This year, in addition to the classes and the lectures, i think it would be great to really mix it up with any of you that will be attending. Certainly, we've all had our struggles in Revit, and we've all come up with fascinating need-based solutions. it would be great to know what others are up to, where their struggles are, and to "share notes" if you will.
I know there is also talk of some extracurricular meetings, that would be great to organize! Steve Stafford has mentioned setting up an Advanced families venue, which i think would be awesome! Joseph Wurcher has mentioned possibly showing Users projects at the Welcoming, which i think would be a great opportunity.
I could see us setting something up for one night on our own, as well. Maybe we could all bring a model to show, and put them up on a wall somewhere with a laptop and a projector? We could do it over a dinner or an after hours thing. If nothing else, it would be great to trade cards and have people to bounce ideas off of when were sitting at our desks the week after, trying to figure out how to model something, and AUGI is having a slow day. We've all been there :) Not to mention, effective ways of sending out the awesome information we get to the rest of the office. Im always looking for better ways to teach! :)
So far, here's what i have going on. Everyone else should post up what time is good, if you want to have a get together of some sort!
MONDAY- I'm arriving at 10am, should be at the venetian by 11ish. The LUG Conference is from 1-5, i believe.
Dinner mtg somewhere on premises...
After 8pm(ish?) is open for whatever...

FRIDAY- I think I'm leaving Friday after the sessions, although that's not set in stone yet.

Ill update this as things progress and/or get set up. If you're interested in any kind of a group get together, post up! :)
Ways to contact me:
Email: arm@dalpos.com
ARMaller@gmail.com
Skype: arm@dalpos.com
AIM: Roadspoet
MSN: armDPA@hotmail.com
Posted by Aaron Maller at 9:07 AM No comments: